Hold Onto Your Hats! 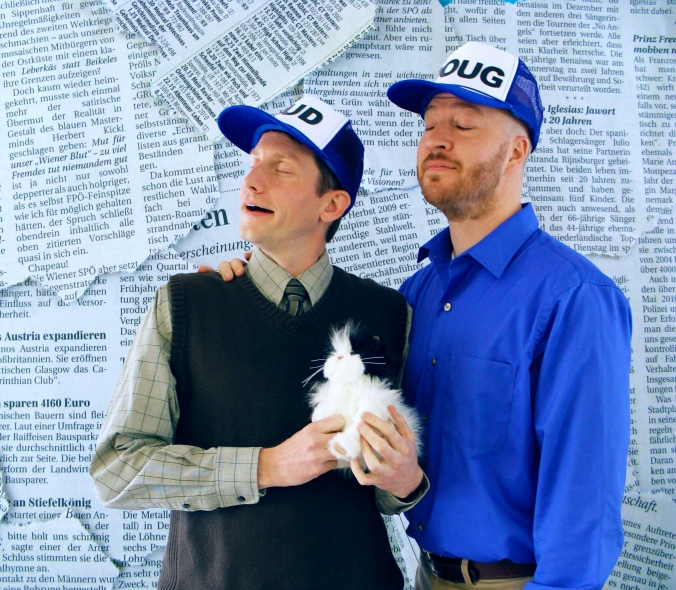 GUTENBERG! THE MUSICAL! is ridiculous! Cathy Hirsch (the Candy Project) assembled a whole cast of zany characters within two award-winning actors- Dan Chevalier (Bud Davenport +others) and Steve Krambeck (Doug Simon +others). These two guys wear a multitude of hats (literally and figuratively) in this two act musical by Anthony King and Scott Brown. The story centers on Bud’s and Doug’s scant research of Johannes Gutenberg and his invention of the printing press. Fast paced, satiric, and just plain stupid fun, this production is a sure hit, particularly combined with good beer and great pizza at Pizza Shoppe Collective in Omaha.

The cornerstone of this musical is two guys, Bud (a virgin looking for a wife) and Doug (a gay man), working together to sell their concept of a musical to any producer who may be out in the audience. While pitching their ideas, they weave in theatrical constructs such as “you must have a serious reason behind the story…such as the Holocaust”, and character development (you must know WHY the devil is evil.) Their work is historical fiction, meaning “it’s fiction that’s true.”

Act One Scene One begins with a serious reason for their musical: a dead baby, represented by a ball cap labeled “Dead Baby” tossed onto the floor. The baby is needlessly dead all because the baby’s illiterate father fed him jellybeans instead of medicine since he couldn’t read the label. He cradles the baby in his illiterate arms and sings, “If only I could read.” Here is their motivation for the development of a printing press.

The love interest enters the story. Helvetica (she’s so important, they named a font after her) stomps the grapes in Gutenberg’s wine press and sings a love ballad, which Bud and Doug call the necessary “I want” song in musical theater.

The evil Monk keeps his henchman, Young Monk, away from the Bible, and advises it’s best to “take in the church and keep the people dumb.” Meanwhile, the Anti-Semitic flower seller pops in from time to time to add tension.

Gutenberg recalls his inner Elvis and sings about changing the press from making wine into a machine to make words. “The wine press makes you drink while the other makes you think,” he says.

One of the funniest parts of the show is when Young Monk is sprayed in the face with a squirt bottle during a rain scene with another agonized “I Can’t Read” song. He suffers a pencil attack from the abusive Monk and they collaborate on a “charm song” about biscuits. What’s a charm song, you may ask? According to Bud and Doug, it is a break from watching anything that anyone may care about. It also allows bringing in a big person for a tiny part.

Parts of this silliness hint at other productions. Speaking the name Johannes Gutenberg in a low voice, clearly and distinctly, into the microphone suggests “25th ANNUAL PUTNAM COUNTY SPELLING BEE,” which is appropriate as Dan Chevalier was a huge hit as Leaf Coneybear in the Omaha Community Playhouse production a few years ago. The necessary love ballad reminds me of SPAMALOT’s “The Song That Goes Like This.” There are bits of irony and clever humor everywhere. They use metaphors, because metaphors are used to “say one thing and mean something else, but not lying.” The guys assure the audience that history is sometimes changed so the story can continue. Every musical ends with a big rock song. And the second act needs a big opening number.

There’s a serious discussion about suicide…well, as serious as these two can get. And a chorus line…with many hats. An audience sing-along about eating dreams, a duet with rats; this musical has it all. It’s all pulled off magnificently by these two actors, with excellent support from the pianist, Sara Collins (Charlie), director Randall T. Stevens, music director Timothy Vallier, stage manager Devon Adams, and producer Cathy Hirsch.

Hats off to everyone involved in this brilliant piece of entertainment!

< Previous Next >
+ Add your own event Eventbrite